Long story short, as a result of a BYU player getting ejected from a game for hitting a ref (1980 Pulusila Filiaga) my Grandma started to deliver fudge/English toffee every Monday after a football game for over 30 years.

The last couple of seasons she attended (prior to 2010) she told me she didn’t know why she still went to the games, because she couldn’t even see the field and could barely walk (we brought her in a wheel chair and would carefully help her walk down two flights of stairs). She said she just loved being there to hear the crowd.

After many months trying to recover from a fall, she decided it was time to go. Knowing her passion for BYU, everyone asked if she wanted to watch the New Mexico Bowl game before they took her off the feeding tube and oxygen. She said ‘I want to be there in spirit’. She peacefully died the day before the game. My dad, brothers, brother-in-law and I left that afternoon (terrible drive-snow, fog, ugly, long).

It wasn’t your typical funeral (more like a party). My cousin painted her casket blue and white and added a BYU decal (see picture). We gave out fudge and English toffee to all those who attended. Lavell even showed up. My uncle, part way through his talk, said ‘Mom always liked a good half time, so I brought a little something’ he went to grab a garbage bag full of mini BYU footballs. My other uncle stopped him, feeling it wasn’t appropriate. After the closing prayer we all stood up and sang the fight song (we did ask the presiding authority if it was okay).

You can read her obituary here: 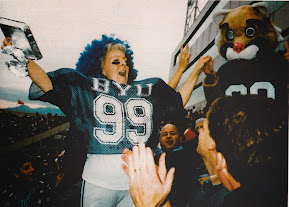 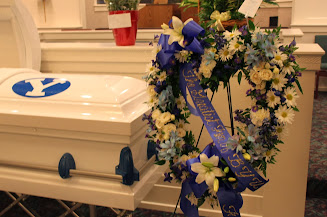