JohnnyComeLately All Canadian
After a long and brave fight CougarNation lost one of their big fans yesterday.
A while ago I shared the story of Kevin and his love for BYU. I had emailed Tom Holmoe about him and how he was bed ridden and had taken a turn for the worse just before the season started.

Tom came through for me and my friend and sent him a touching video with tributes from many of the players. Kevin watched the video frequently and would talk about the team and his love for BYU (even during this awful season) with me every day when I came to see him.

His story touched many lives, Kevin has been featured in a New Era article, he served a service mission from his bedside and he was always cheerful, optimistic and empathetic to his fellow men. Kevin touched my heart and my families heart in a way I could never imagine from someone I was not related to.

I visited him almost daily for the last 2 months. I provided a type of service that would help relieve some of his pain and his mom frequently would call or text me to ask if I wouldn’t mind making another house call. I would typically bring my wife and children and “Going to see Kevin” was a phrase heard so much in my house that my daughters would use it when playing with their toys.

My 2 year old loved to come over so he could rummage in Kevin’s room for his giant Mickey Mouse stuffy. He would find it, bring it outside and alternate between hugging Mickey and hugging Kevin. So when the call came it was very hard for me.

Kevin passed while in the ER. He was under a lot of pain, was heavily medicated but was surrounded by his family. Throughout his ordeal and especially the last few weeks, Kevin has maintained such a strong belief and testimony of God and the plan of salvation. He served his indexing missionand inspired hundreds of local youth with their own family history. He started a small business selling handmade items where all proceeds would go to the church’s missionary fund. Here is a picture of one of his handmade keychains. 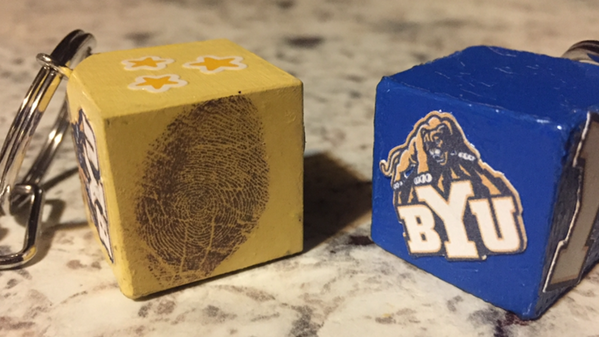 Kevin had taken a very sober approach to his mortality. He even planned out exactly how his funeral would go, from the speakers to the songs, to the food served after. He asked his mom to ask me to be a pall bearer and told his mom to make sure my son gets his Mickey.

I want to thank all of you who have reached out to Kevin and me during the last couple months of his life.It took me a while to share my story to my FO as seeing Kevin had been a regular part of my life for the last 4 years, and it took even longer to share his story to the main board. But after sharing my story I have had so many members tell me how Kevin’s story has touched them. I shared with him the everyone’s words of encouragement and he appreciated them

A huge thank you to Zephyr who sent Kevin six hats of his choice, but then reached out again and said “hey does he want any others I have new designs?” And he promptly sends another batch of hats. Big thank you to Jdub. He helped me to put the video that tom sent me to YouTube, something small but something I had no clue how to do it myself.

Finally a big thank you to everyone else who has sent me BMs, texts and messages about how Kevin has touched their lives. I share each story with Kevin and it helped give him strength these last few weeks. Even to the end he always talked about his love for BYU and especially the football team.
Report problem with this ad
Report problem with this ad
Messages
Author
Time
After a long and brave fight CougarNation lost one of their big fans yesterday.